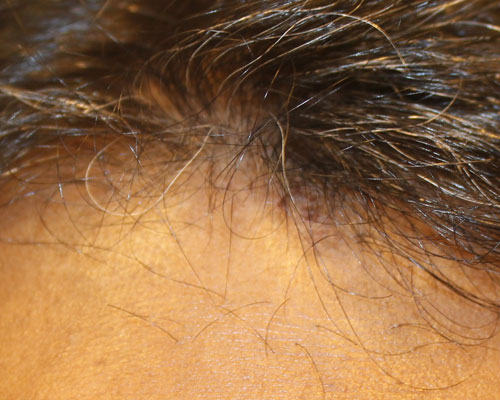 Androgenetic alopecia is by far the most common cause of hair loss.

A certain cause of androgenetic alopecia is the abundant presence of dihydrotestosterone (DHT) in the hair follicle.

DHT is highly damaging to the hair: It first works by shortening the growth phase of the hair, then causing the progressive miniaturization of hair (which will then produce an ever weaker hair), up to the complete atrophy and then the cessation of all productive activity.

DHT is the product of the transformation of androgen hormones as a result of the enzyme 5-alpha reductase.

The androgen hormone par excellence is testosterone, a purely male hormone, but also present in women.

In the male the testosterone is secreted primarily by the interstitial cells of the testes (0.8 mg per day), while in women the secretion of androgens is smaller and comes from the ovaries and the adrenal cortex.

It is incorrect to define it as male baldness (Androgenetic Alopecia) as both men and women suffer from it: You can use the term androgenetic baldness for men to distinguish its typical pattern (temple recession, vertex baldness) than female androgenetic alopecia, characterized by diffuse thinning all over the scalp.

Androgenetic alopecia affects about 80% of men, but also 35% of women of childbearing age, and as many as 50% of those in menopause.

The transformation of androgen hormones into DHT occurs directly in the sebaceous gland of the hair in the predisposed follicle, and not in a certain area of the skin, the proof is the fact that when transplanting hair not predisposed to baldness (sides and rear areas of the head in males) to areas that were affected by hair alopecia, the transplanted hair activity continues throughout its life. 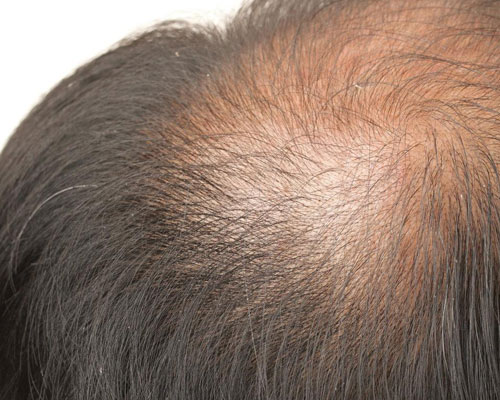 In the presence of DHT other causes seem to still affect the process of androgenetic alopecia. From the most part it’s advanced co-responsibility of immunological factors: Once the process has started the operation of DHT on the immune system would attack the affected follicles, preventing the proper production of hair.

Another field in which research is trying to remedy is on different receptivity, found by several researchers, of some follicles’ chemical messages to the biological system that regulate the hair cycle.

Afflicts about 80% of men, but also 35% of women of childbearing age and as many as 50% of those in menopause.

At what age androgenetic alopecia can develop?

In humans very early: Immediately after puberty and sexual maturity and not infrequently at around 18-20 years in cases already very compromised. The phenomenon reaches its peak between 20 and 30 years, progressing up to 40-50 and then slows down or stops.

In women it can even manifest itself at a young age, starting from 16-20 years in those of childbearing age, with a slow but steady progression up to 45-50 years.

When menopause kicks in even women who had never suffered from this ailment can suffer very pronounced androgenetic baldness, and those women who already had problems see a recrudescence of the phenomenon. 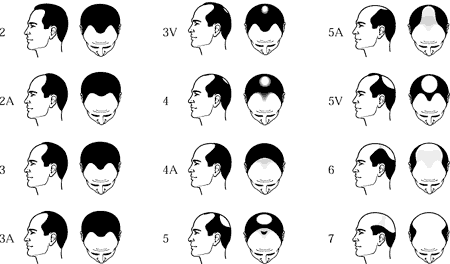 ANDROGENETIC ALOPECIA – How to check it out?

In which areas androgenetic alopecia appears?

In males the first signs are in the so-called gulfs or frontal loops (improperly defined as temple recession or receding) and then also hit the apical region of the head.

As a result the phenomenon also moves to the central area “connecting” face and neck.

In women a thinning of the central area is more frequent, at least initially, while the front is less involved.

Usually two scales are used to describe the progression of androgenetic alopecia, Norwood for male individuals and Ludwig for females.

Not unusually it presents itself with a significant increase in the number of falling hairs, and, indeed, many individuals become bald losing few hairs per day.
The first sign of the coming of baldness (androgenetic alopecia) is the progressive thinning of the stem, initially not significantly evident to the naked eye, then more and more blatant.
Other symptoms with better probability are the breaking off of the stems, a less brilliant aspect of the mane and a more difficult combability and sealing of the fold.
Symptoms are subtle and, as they do not cause significant changes in appearance, many who are affected are inclined to underestimate them, lolling in the hope that sooner or later everything will go back as before.
It is a serious error, because the effectiveness of treatments is closely linked to the timeliness of intervention: Where there was lost hair many years before, in fact, there are matrices that are difficult or impossible to recover.
All of the subjects who have cases of relatives suffering from androgenetic alopecia (not only father and mother, but also paternal uncles and maternal grandparents) should be assessing their cases with a check-up that includes at least a trichogram at around 18-20 years of age, still even if particular problems aren’t evident.

The grandfather was bald, no, uncle daddy … and I? Is predisposition a sentence?

Not always the one who has a bald father is bound to the same fate as he. We are not clones, but a genetic heritage cocktail.
However, if any of the ascendants (parents or grandparents) has “passed” the gene his fate is (almost) inevitable. That “almost,” in parentheses, is due to the fact that each person has two copies of the same gene, one from the father and the other from the mother. The combination that is achieved is often unpredictable, as is amply demonstrated by the high number of children with bald fathers with thick manes and vice versa. Of course if the predisposition starts to manifest itself there is not a single way to prevent baldness to occur: A cure begins with the earliest symptoms of the phenomenon.
It is widely believed that an inherited disease cannot be cured, but medicine, fortunately, is able to cure genetically transmitted diseases worse in severity than baldness. Some examples? Hemophilia, hypercholesterolemia, essential hypertension, gastric ulcer and diabetes mellitus, that can be monitored with specific therapies that allow sufferers to live well.
A properly cared for androgenetic alopecia can be inhibited with the consequent noticeable reduction of the possibility of becoming bald.

Why some areas will lose their hair and others don’t?

In males androgenetic baldness saves side and rear areas of the head, while in women the phenomenon can affect the whole scalp, without ever reaching a complete disappearance of hair. The reason lies in the different constitutions of the skin, but in particular the receptivity of individual hair follicles. In some of these, in those genetically predisposed, a mechanism triggers the hair loss process, in others not.
The practical proof comes from hair transplant: Hair follicles that are not genetically predisposed when transferred to areas in which there are (or were) present “sick” hair continue to live for life, proving once again that is not in the skin that causes the death of that hair, but it’s the follicle.

Below all publications of the Italian society of Trichology: http://www.sitri.it/pubblicazioni/