Hair restoration is one of the branches of cosmetic surgery in strongest development, just think that in the world nearly 1 million hair transplants take place every year and in 2010 the ISHRS has estimated its market size at $ 1.8 billion dollars.

Hair transplantation is a surgical procedure in which hair is transferred from the back or lateral of the scalp (donor area of permanent hair) to a bald or thinned one, to the upper front or rear (crown) of the scalp, which is called the recipient area. Once the hair is transplanted, it will continue to grow throughout a person’s life.

The first hair surgery was performed in 1959 in New York by Dr. Norman Orentreich and coincided with the publication of his landmark study in which he described the surgery and the use of 4-6 mm grafts.

Dr. Orentreinch is the one who invented the concept of “dominance of the donor area” to explain the basic principle of the transplant, which refers to the fact that transplanted hair, in hair surgery, continues showing the same characteristics that had at the time of its removal from the donor. In other words, the healthy hairs that are extracted from the temporal or occipital scalp and transplanted into the bald areas of the scalp will continue to grow in the same way they would have grown in the donor area.

The enthusiasm for the discovery distracted attention from a key factor. Being able to grow hair did not guarantee a satisfactory result from the aesthetic point of view and this was due to the size of the grafts that produce the so-called doll hair effect.

Fortunately, hair surgery techniques improved and the size of the grafts was gradually reduced until reaching a key concept proposed in 1995 by Dr. Bernstein and from Dr. Rassman namely that of “Follicular Unit Transplantation”. The principle is quite simple and can be summed up by saying that the best results in terms of aesthetics are obtained when the hair is implanted in the way that is present in nature or as follicular units. 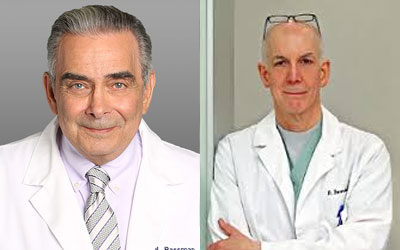 The follicular units are small groups of 1-4 hairs naturally present in any human scalp.

Having enough capacity is needed to obtain these follicular units from the donor and a great aesthetic sense to guarantee that the follicular units are implanted in a way that maximizes the impact of cosmetic hair transplant surgery.

In a hair surgery there are two ways to obtain the follicular units from the donor permanent scalp and this allows us to distinguish basically two surgical techniques:

In transplants via FUT (strip) the hair is extracted from the safe area of permanent hair located on the back and sides of the scalp by removing a thin strip of scalp, whose dimensions vary depending on the number of follicular units to be extracted. The wound is sutured with stitches or closed with metal staples and once cured produces a thin linear scar. The strip is placed under a series of stereoscopic microscopes and dissected to get the single double triple and multiple grafts. The follicular units are then placed inside small incisions made by the surgeon in the recipient area. Healing in the recipient area can be very fast and if the surgery is performed properly, and there will be no remains of any type of scar in the recipient area.

With FUE follicular units are removed one by one from the rear and side of the scalp using a small instrument of cylindrical shape called punch manually controlled or with the aid of a robot. The punch leaves small circular shaped wounds in the extraction area which will heal after about a week leaving scars of micro dimensions of less than a millimeter. There are many types of punches used for the extraction, each of these has its own advantages and disadvantages. As in FUT grafts are placed inside small incisions that the surgeon performs in the recipient area.

The insertion step is substantially identical in the two techniques and transplanted follicles start producing new hair within 2-3 months after surgery. The final result will be seen after 12 to 15 months.

In recent years we have attended to the gradual introduction of robotic-assisted surgery for hair transplantation.

Robotic-assisted hair transplant consists in the automation of some phases of FUE with the assistance of a robot. The Artas system is the most concrete example, it’s the use of a video-guided robot able to carry out follicular unit extractions by separating them from the surrounding tissue, allowing better accuracy.

In this case also there are advantages and disadvantages, which will be detailed in other articles, but it should be remembered that the aesthetic sense of the surgeon and the incision step can not in our opinion never be replaced by any robot.