HAIR TRANSPLANT IN WOMEN – IS IT POSSIBLE?

A significant number of women suffer from hair loss due to different factors which are related to the typical process of female alopecia according to the Ludwig scale. These additional conditions that cause the fall must be discarded before we can talk about Female Pattern Baldness. Among these alternative causes of baldness is the most common is telogen effluvium.

Typically, a woman may notice a significant loss of hair from one to six months after living a moment of intense stress in her life, as it can be a surgery, a severe illness or a condition of psychological or social stress.

The bad news is that there is no treatment for this type of fall.

The good news is that you do not require any treatment. The hair should grow back to normal after experiencing a dormant stage. In this case, hair transplantation in women does not make sense. 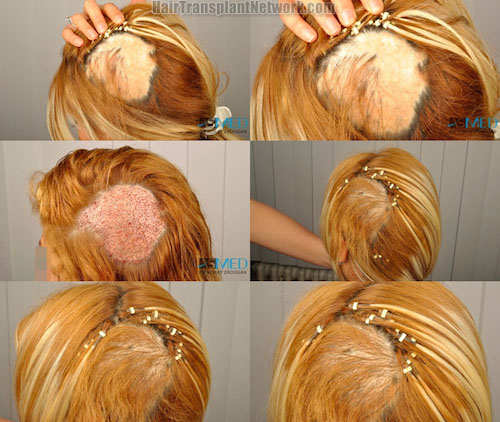 Less commonly, you can come across women who suffer from traction alopecia. In this case hair transplant in women can be a viable alternative if properly weighted.

The slow but chronic “pull” of the hair roots can in some cases cause permanent damage to the follicle with the result that the hair does not grow back in those areas. This form of alopecia can be treated by hair transplantation provided that the patient decides to change her way of combing her hair. It’s possible that some patients who have undergone a face lift or other procedures that leave scars on the scalp albeit minimal, may end up with a too high hairline. In general this type of alopecia can be effectively corrected by hair transplanting in women.

Hair transplantation in women – If it is androgenetic alopecia? 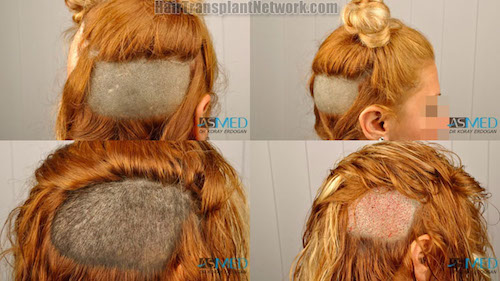 Among women in their fifties about 25% suffer from problems of androgenetic alopecia. The evolution of female baldness tends to be different from the male one. Typically, women will notice a general fall of their hair all over the top of the scalp but will retain their hairline. Although this form of hair loss has been regarded as associated in some way to the male one, Dr.Norwood published a paper expressing his views on this issue.

If his conclusions are correct alopecia should not be considered as the same problem that occurs in different sexes.

Some of the key points of the study are:

1. The path of balding in men usually starts with the retreat of the hairline and ends in a fall involving the entire top of the scalp. Female alopecia produces diffuse thinning in the area behind the hairline, but it does not occur a backward receding of the same.

4. Women who have a predisposition to develop male pattern alopecia if they took high doses of testosterone would develop androgenetic alopecia with an evolution typical of men.

5. A study has brought to light the case of a young woman suffering from hypopituitarism who presented alopecia typically feminine without detectable levels of androgens circulating in the blood (testosterone other male hormones). In this case the type of baldness was not androgen-dependent.

6. Treatment with Propecia, a drug that blocks the conversion of testosterone to 5-Dht, stabilizes and improves the fall in men, but has little or no effect in women suffering from alopecia.

We can conclude that hair transplant in women is not a good solution in the case of androgenetic alopecia, especially with in the female pattern.

HAIR TRANSPLANT IN WOMEN – Am I a good candidate?

Hair transplantation in women can be a solution.

I invite you to read this post that analyzes a case treated by Dr. Koray Erdogan on hair transplantation in women: http://bellicapelli.forumfree.it/?t=62140831