In 2012 SMP, thanks to Milena Lardì’s protocol, was officially recognized as a complementary or substitute technique for hair restoration and complementary to all the pharmacological treatments that could be followed by a potential patient.

The award was presented directly by Prof. Marco Toscani to Milena Lardì during the ISHRS event of 2012.

On 17/11/2013 the S.i.tri, Italian Society of Trichology, recognized Beauty Medical SMP system as a technique suited to complement hair surgery, as an alternative and effective solution, together with the traditional and most advanced treatments against baldness. 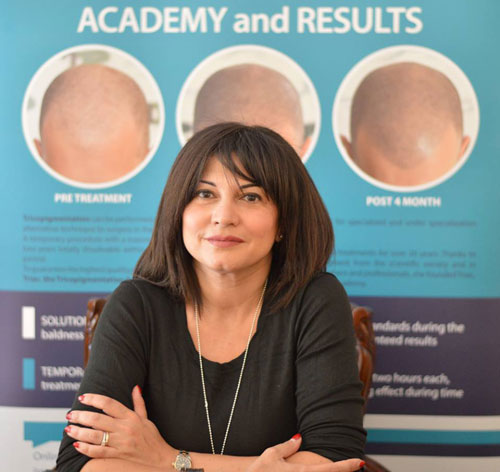 All these awards and the increasing use of the technique by the best surgeons in the world in the field of hair transplant have made hundreds of people undergo this treatment with good results.

It is remembered that Beauty Medical, thanks to the studies of Milena Lardì, has developed over the past decade the following:

These have been studied by Milena Lardì over several sessions with multiple targets, with a common goal: Perform a camouflage on baldness.

Pre Surgery SMP sessions: Thanks to this strategy (to be undertaken at least one month prior to surgery) you have the chance to face the post-operative phase with more serenity because the coverage given by the pigment deposits allows you, the patient, an immediate result, more orderly, thick, and optically SMP reduces redness generated by post-trauma irritation.

Post Surgery SMP sessions: It’s possible to plan a treatment following hair surgery in the hypothesis that in the event that the surgery is not sufficient to ensure full coverage or in the case of scar coverage. The treatment can be performed even after surgery, for at least six months, to maximize density and minimize scars as much as possible.

Hair pigmentation sessions as an alternative to transplant: We know that unfortunately not all patients subject to androgenetic alopecia can undergo a hair transplant with good results. It is for this reason that now more and more surgeons adopt the SMP technique or direct their patients to contact hyper-qualified and recognized structures.

SMP sessions as integration with therapy: SMP in this case is a valuable psychological and aesthetic support to the patient starting therapy (usually based on minoxidil and finasteride antiandrogens) who will see the first results in a lapse no earlier than six months. With SMP they can enjoy from the start a valuable support.