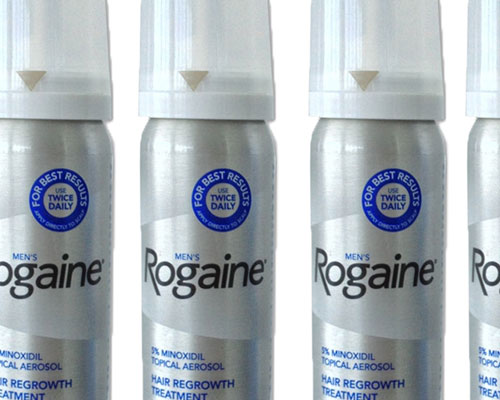 Minoxidil is the generic name for products originally developed by UpJohn and called Rogaine in the USA or Regaine in Europe and elsewhere.
Rogaine and Regaine are the trademarks of UpJohn Inc., USA. Rogaine and Regaine are exactly the same, but are simply packaged differently. The FDA would not allow UpJohn to call their product Regaine in the USA as it implies hair regrowth (Re-Gain), whereas the FDA regards minoxidil as a hair loss prevention drug. UpJohn had to change the name to Rogaine before receiving the FDAs approval to sell its product in the USA.

First introduced in 1988, Rogaine was originally only available with prescription and used under the supervision of a doctor. However, extensive trials by UpJohn convinced the FDA to pass Minoxidil as acceptable to sell over the counter directly to the public.

Rogaine or Regaine 2% concentration is widely available throughout the USA and Europe and it is the only proven hair loss treatment available without prescription.

For many years Minoxidil was only available in a 2% concentration and exclusively from UpJohn, as they held the patent rights. The patent ended in 1996 and since then several other drug companies have started to produce and sell minoxidil 2% under many different brand names at a lower price than UpJohn. As of 3 July 1998, the distributors of 2% minoxidil registered with the Federal Drug Administration are Alpharma, Bausch and Lomb, Copley Pharm, Hi Tech Pharma, Morton Grove, Sight Pharms, Teva, and of course Pharmacia Upjohn. These manufacturers/distributors supply pharmacies and supermarkets with minoxidil in a wide variety of packaging as retailers require.
In response to losing the patent on minoxidil 2% UpJohn embarked on clinical trials of a 5% concentration solution. This is now available over the counter in the USA as Rogaine Extra Strength. UpJohn retains a new patent on this 5% concentration. However, it is possible to buy 5% minoxidil solutions from other manufacturers. The solutions usually have extra ingredients to distinguish them from UpJohn’s product and circumnavigate any patent lawsuit brought by UpJohn.

MINOXIDIL – A topic application – how does it work?

Minoxidil for hair loss is used as a topical application. The drug is dissolved in a mixture of water, alcohol and glycol, which is then applied to bald regions of the scalp as directed by the manufacturers. For men it is believed to be most effective for hair regrowth on the vertex rather than on the temples.

Minoxidil is a stable and inactive drug. When it is applied to the scalp and penetrates into the skin it must be converted to an active, but unstable, product called minoxidil sulphite. Our body produces a catalyst called sulfonyl transferase that converts the stable inactive Minoxidil into the unstable active minoxidil sulfite. minoxidil sulfite activates potassium channels in cells and this leads to hair growth.

The exact molecular mechanism operating in the cells that results in hair growth is not known. Some have suggested that minoxidil, as a known vasodilator, dilates the blood vessels around hair follicles and the increased nutrient supply permits increased hair growth. However, this is an unlikely explanation, as other vasodilator drugs do not promote hair growth, and studies have shown no significant changes in scalp blood supply when using minoxidil.

Topical minoxidil apparently induces an increased rate of DNA synthesis in follicular cells in early anagen, but not in non follicular cells such as fibroblasts or epidermal keratinocytes. Minoxidil induces a significant increase in DNA synthesis in all hair follicle cells in a dose-specific manner. Recently, researchers at L’Oreal suggested that minoxidil works by activating PGHS 1 (prostaglandin endoperoxide synthase-1) which may help promote hair growth.