PROPECIA, PROSCAR AND FINASTERIDE – A DRUG AGAINST BALDNESS 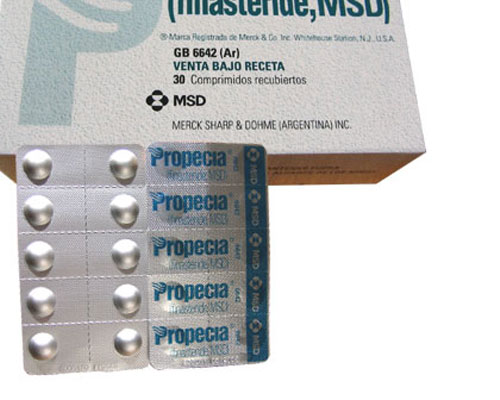 What is Propecia and how does it work?

Finasteride is the generic name for a drug that has been hitting the news headlines as a treatment for androgenetic alopecia. The trade name “Propecia” is used for this new hair loss treatment. You may also have heard another trade name “Proscar” which is the same thing as Propecia/finasteride but Proscar is specifically used for men with prostate complications. Propecia and Proscar are the trade marks of Merck & Co., Inc., USA.

finasteride was originally developed by Merck as a drug to treat enlarged prostate glands. During the trials on men with prostate problems an intriguing side effect of hair growth was observed. With finasteride passed as a prostate drug by the Federal Drug Administration (FDA), Merck decided to pursue the possibility of developing Propecia /finasteride as a treatment for hair loss.

As described elsewhere, 5 alpha-reductase is an important enzyme found in and around hair follicles that converts testosterone into the far more potent dihydrotestosterone. Dihydrotestosterone is the single most important hormone that adversely affects scalp hair follicles and leads to androgenetic alopecia. There are at least two types of the 5 alpha-reductase enzyme: Type 1 is believed to be more active than type 2 in androgenetic alopecia.

PROPECIA, PROSCAR AND FINASTERIDE- What is their function?

Phase III trials of Propecia (finasteride) have been ongoing for several years. According to Propecia’s manufacturer Merck, a placebo controlled double-blind study of Propecia initially involved 60 dermatology clinics (33 in the USA, 27 non-USA) and 1533 male volunteers during the first year. Of these volunteers 1215 continued in the program for a second year. The men were between 18 to 41 years of age at the start of the study and had androgenetic alopecia defined as type III, IV or V on the Hamilton/Norwood scale. The men were given either 1 mg of Propecia per day or a placebo.

Propecia is taken as a tablet orally and works systemically.

Both subjective and objective tests were used regularly through the study to evaluate hair growth. Subjective analysis involved each patient answering a validated questionnaire to examine their views on the success/failure of their treatment. Objective analysis involved observation of a given target scalp area marked in the same place on each patient with tattoo dots. The evaluation included consideration of terminal hair density and an overall evaluation of scalp skin coverage looking at density, linear hair growth, diameter, duration of anagen, and hair replacement kinetics. Global photographs were also taken regularly for semi-quantitative analysis of overall cosmetic changes. Both subjective and objective data were analyzed by dermatologists who were unaware of which individual was receiving Propecia and which was using a placebo.

PROPECIA, PROSCAR AND FINASTERIDE – The results of the tests

The first year results of the phase III tests were a mean density increase to 86 hairs per inch diameter in the marked area of scalp (+11%) for those using Propecia. In contrast placebo users had a mean density decrease of 21 hairs (-2.7%). This apparently resulted in a mean difference of 107 more terminal hairs per inch diameter circular target in the Propecia users compared to control placebo users. Blind assessment of the global photographs (semi quantitative analysis) after one year suggested total hair growth improvements in 48% of men using Propecia and 7% of placebo users. 30% of Propecia users were described as slightly improved and 18% as moderately or greatly improved. 6% on placebo were slightly improved and 1% moderately or greatly improved.

In the second year of study there was no increase in number of hairs growing on the marked scalp area for Propecia users so hair density remained the same. However, semi-quantitative analysis of global photographs suggested continued improvement in general hair coverage in the second year of use. The improvement was due to hair follicles present in the first year’s analysis developing a prolonged anagen growth phase and increased hair fiber diameter. Placebo users continued to have gradual progression of androgenetic alopecia and reduced hair coverage.
The studies indicated that age of the individual made no difference to the success rate and the duration of the hair loss made no difference. As expected, those with least hair loss had the least improvement when using the drug. Caucasians were observed to have a better response to finasteride compared to Asians or African-Americans. So, Propecia works for a proportion of men but not for all men with androgenetic alopecia. It is most likely to stop further hair loss, and for a lucky minority the drug actually encourages hair regrowth.

Splitting finasteride pills (Proscar) for use in androgenetic alopecia treatment is common practice in countries where Propecia is not yet available. Proscar tablets are each 5mgs finasteride dose. 5 mg may be the optimum dose for urinogenital treatment, but it is more than is necessary for androgenetic alopecia. Propecia tablets are 1 mg dose each so splitting Proscar tablets in 4 or 5 pieces is a common recommendation.