Psoriasis is a common, chronic, scaly rash that affects people of all ages (about 2% of the population). There is a genetic predisposition to psoriasis i.e. it tends to run in families. Psoriasis is also influenced by many environmental factors. It is not contagious and is not due to an allergy.
The most common ages for psoriasis to first appear are the late teens and the 50s. It affects men and women equally, although girls are more commonly affected than boys.
Psoriasis is often so mild it is barely noticed by the affected person, but it can occasionally so severe the patient must be admitted to hospital for treatment. It may or may not be itchy.

Psoriasis is characterized by red, scaly patches of skin, which usually have very well defined edges. It is often symmetrical, affecting both sides of the body. The scales are typically silvery white. These typical scales may not be so obvious if psoriasis affects a body fold, such as the armpit or the patient is regularly using emollients. Then they are more likely to be smooth and shiny.
Psoriasis is often very mild, causing a few dry patches on the back of the elbows and knees, some irritation in the umbilicus (belly button) and the natal cleft (between the buttocks) or scaling in the scalp. It can, however, affect any area of skin and it may be severe or atypical. 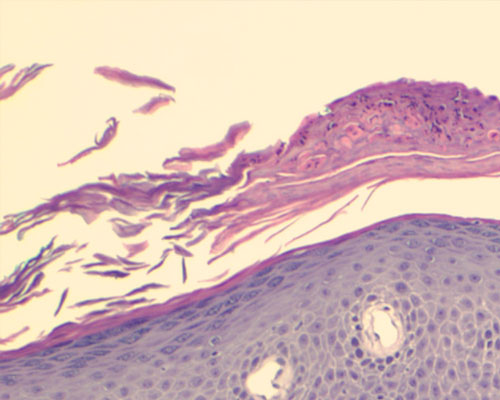 After psoriasis has cleared up by itself or with treatment, it may leave dark or pale marks (post-inflammatory hyper pigmentation and hypo pigmentation). It does not cause true scarring. The pigment changes gradually improve over several months.

Exactly what causes psoriasis is not fully understood, but there is a lot of active research in this area. The immune system is involved and appears to be overactive in a way that causes inflammation. Specifically, there is excessive production of TH1 cytokines, particularly TNFα. These have many effects, including growth of extra blood vessels within the skin (causing the red color) and increased turnover of the skin cells (causing the scaling and thickening of the skin).

Like most diseases, psoriasis is influenced by inherited characteristics. Up to 50% of people with psoriasis will know of another affected family member. Patients with a family history of psoriasis tend to develop psoriasis earlier in life than those without a family history.

Physical and emotional stress may precipitate psoriasis and are hard to avoid.

Psoriasis localizes around the site of physical, chemical, electrical, infectious and inflammatory injuries as they heal (the Koebner phenomenon). Less often, psoriasis may localize in old scars.

The relationship of hormones to psoriasis is unclear. Post-puberty is a peak time for the onset of psoriasis. Pregnancy may also have an effect on the severity of the psoriasis. It usually improves after the birth of the baby with the potential for worsening, but the reverse can occur. Psoriasis does not affect the unborn baby.

Sunlight is usually beneficial for psoriasis (except in sun sensitive/photosensitive psoriasis).

Many psoriasis studies have noted that many affected patients are overweight or obese. Recently, it has become clear that the severity of psoriasis is correlated with insulin resistance, a feature of metabolic syndrome.

There is an association between increased alcohol intake and smoking and the development of severe psoriasis. However, whether this is a cause or an effect is not known.

Is there a cure?

To date there is no cure for psoriasis, but satisfactory control of the disease is possible for most patients.

Some people have a single episode of psoriasis that clears after a few months and never recurs, quite likely after acute guttate psoriasis. Most other forms of psoriasis run a fluctuating course, with periods of marked improvement and even complete clearance, only to relapse at a later time. There may be several years between relapses. A small group of patients have severe, persistent psoriasis that is very difficult to treat and can be very disabling for those affected.