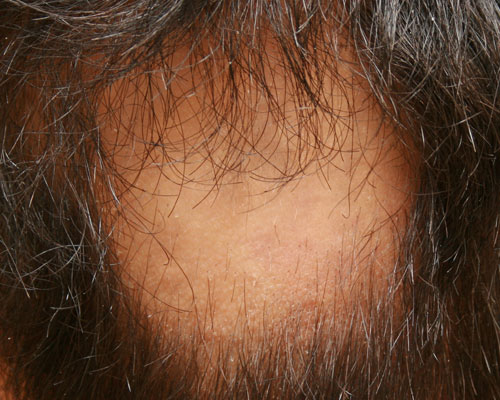 Alopecia areata is an inflammatory pathology with no scar tissue, which manifests itself through hair loss in men, women and children. Alopecia Areata usually occurs in the form of patches with complete loss of hair or hair in the scalp or other parts of the body. In the most serious cases alopecia areata can progress to total loss of all body hair.

Although this is not a disease that directly threatens survival, alopecia areata is undoubtedly a serious problem especially for the psychological and social effects that can cause hair loss in those who are affected.

The characteristics of the disorder that we now know as alopecia areata were described for the first time in 30 BC by Cornelius Celsus. The latter described two forms of alopecia, using the Greek term alopekia, literally translated as “scabies of the fox”. Alopecia areata was given different names throughout history.

The current term “alopecia areata” however was first used by Sauvages in his opera “Nosologica Medica,” first published in the 18th century. In the past it was thought that alopecia areata was caused by stress, infectious agents or hormonal dysfunctions. The hypothesis that this disease is autoimmune in nature and that hit individuals who experience a genetic predisposition to the same was put forward for the first time in the mid-20th century.

ALOPECIA AREATA – THE LIFE CYCLE OF THE HAIR 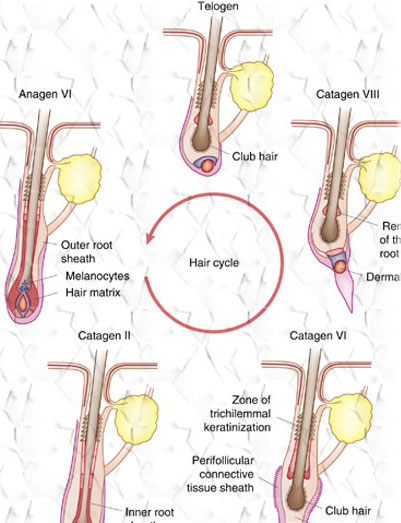 SUsually, each hair follicle follows a life cycle. There are three main stages in the life cycle of the hair: Anagen, Catagen and Telogen. The Anagen active growth phase is when the hair fiber is produced. The Catagen phase follows, characterized by a progressive and controlled hair follicle regression. Finally, the bulb enters the Telogen phase in which it enters a so-called state of rest.

The factors which trigger the development of alopecia areata and the mechanisms of its development are still shrouded in mystery. Some of the most accredited hypothesis are:

• Autoimmune disorder: Data collected through direct and indirect observations underline how a pathogenesis of autoimmune nature may be involved in the early development of alopecia areata. The immune system designed to protect humans from viruses and bacteria incorrectly attacks the hair follicles causing hair loss.

• Environmental triggers: vaccines, injections to reduce sensitivity, chemical exposure, are all factors which can cause the development of alopecia areata. Some dermatologists claim that bacterial or viral infections may push the immune system to respond inappropriately against hair follicles in some susceptible people.

• Stress and anxiety: There have been numerous reports of cases where individuals who have lived stressful situations have been affected by an abnormal loss of hair

• Abnormal keratinocytes: Some researchers argue that these are potential targets in the follicles affected by alopecia areata. 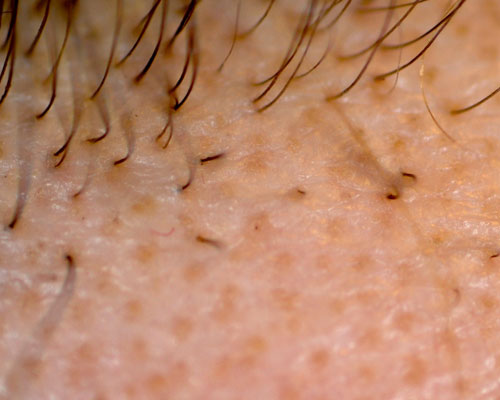 ALOPECIA AREATA, HOW IT APPEARS?

Alopecia areata can appear in many different forms. Usually, it grows as a single bald spot one or two centimeters in diameter that may appear both in the body and scalp. The first patch can expand and other hairless patches may consequently occur. Alopecia areata can present itself in several forms:

• Loss of all hair and body hair (alopecia universalis)

Alopecia areata may develop in some areas also as a skin mole. Moles are small areas of skin with different characteristics than the surrounding areas of skin. Perinevoid alopecia areata occurs around central hairless areas that are produced around pigmented nevi.

In alopecia areata in active phase the hair cycle is changed and there is an abnormal average deviation of hair that would normally be in the anagen, catagen and telogen. Falling hair seem to have “roots” and appear as hair in the telogen phase when examined under a microscope. Very short hair (1-2 mm) can often be broken at the edges of patches of alopecia areata. This hair is defined by doctors as an exclamation point. Hair that is less severely damaged may continue to anagen, but produce dystrophic hair as described previously.

Alopecia areata affects commonly pigmented hair and is less able to attack white hair or slightly pigmented hair. Alopecia areata has an unpredictable course and may take some years when there is no hair regrowth or oscillate between phases of manifestation of the pathology and disappearance of the same. In some cases it may last only for a short time and the normal hair growth cycle return after a few months of the onset of the disease. Due to the conversion from telogen to anagen hair that grow back, once again ceasing the effects of alopecia areata, the initial hair regrowth is characterized by the appearance of short white hair and frizzy.

Some people who suffer from alopecia areata can experience a change of hair color during or after an episode of it and sometimes these color mutations can be permanent. The reason that the pigmented hair is more frequently affected by alopecia areata and mechanisms whereby the hair that grows back initially as white are unexplained.

A percentage of between 10 and 65% of people affected by alopecia areata can also experience problems with fingernails, the most common of which are punctiform irregularities in the structure of the same. Other typical abnormalities are longitudinal strips, fragility, stains in the area of the lunula (the area at the base of the nail that often has the shape of a half moon rising), koilonychia (a deformity characterized by the concavity of the external surface of the nail), onycholysis (separation or partial loss of toenail or hand) and onychomadesis (complete loss of the nail). The nail problems may precede, follow or occur simultaneously to hair loss.